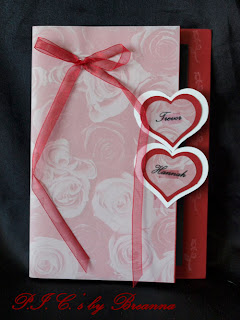 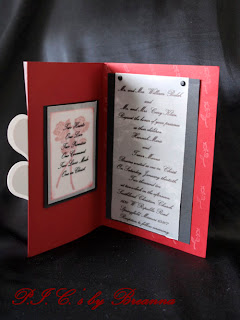 Trevor and Hannah's Wedding Invitations
Trevor is another one of my brothers. The most recent to have married. Their wedding colors were red and white and Hannah's flowers were roses. Trevor actually was the main designer here. Hannah had found an invitation she had liked with hearts on the front, but it was all white and she really wanted red. So, Trevor came to me. I made up a few designs for him, but they weren't quite what he was thinking. However after looking them over, he came up with the idea of the hearts being placed on the front with their names. The design then grew with more and more ideas until it ended up like this. :) The hearts with their name on them however did have to be hand cut, making it a little more difficult. My best friend helped me out, making it that much more enjoyable! :) Trevor and Hannah also had an invitation assembly party. Family and friends came to help put them together. Very fun to watch though, for the party ended up being mostly guys!! It was great seeing them all around the table sticking hearts together, edging envelopes, and double stick taping paper together. They did go target shooting afterward though. :)
Posted by P.I.C.'s by Breanna at 1:24 PM

P.I.C.'s by Breanna
Columbia, Missouri, United States
Welcome! This is a blog of all of my favorite photography I've taken throughout the years! I love taking photos and creating photos! Photography is pausing a moment in time, which for me is priceless! Please explore and enjoy! I have much to offer if you need any photography! Check it all out in my "Welcome" page!

Any and all images on this blog are available for purchase. You can get them framed, put on a card, or just a print. :)

All of the images on this blog have been decreased in size and labeled with my name. Originals are much larger and my name is usually in the right hand corner and much smaller. :)

Also I ask that you do not copy or use any of the photos on this site for yourself in any way.

Thank-you for visiting and please come again!! Feel free to leave comments, I enjoy hearing from my viewers. :)

Thank-you one and all for following and commenting!! :)

Have a suggestion, or advice?? Please leave a comment! I am always up for suggestions or advice to help me become a better photographer and/or business owner. =)